Seeing beyond the hype in blockchain, given the level of disruption and its game-changing potential, is not easy.

One way to answer is to look at blockchain, and other distributed ledger technologies (DLT), as a possible architecture for solving a non-trivial problem.

What problem? Creating a shared state (which includes ordering all the changes to this state) for several distributed entities which rely on asynchronous, potentially fallible communications only. Asynchrony means that there will be noticeable communication delays between participants and fallibility refers to the fact that messages (intentionally or not) may be altered or corrupted. Both factors make it quite difficult for all participants to agree on a shared truth. 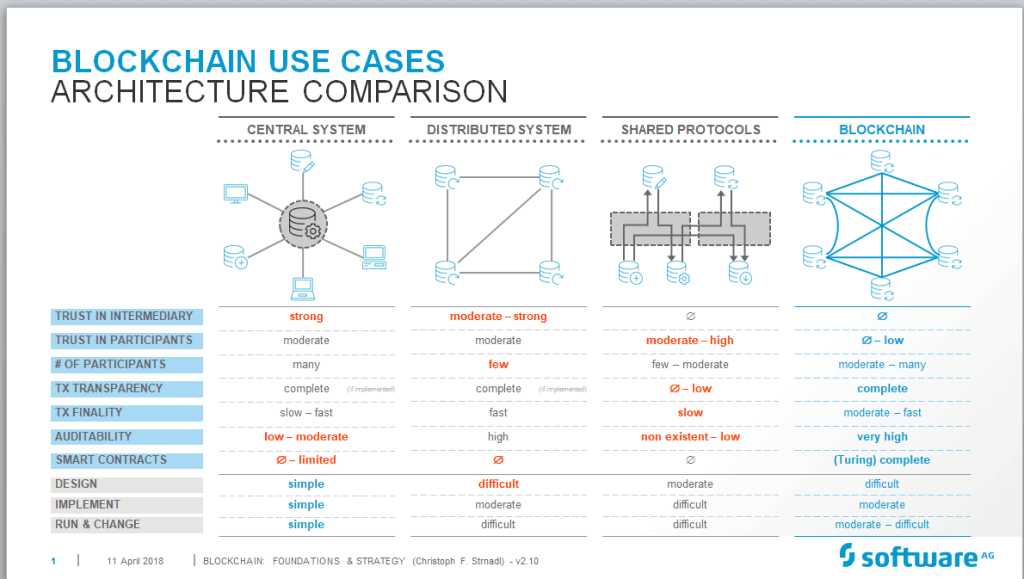 I have depicted four possible architectures addressing the aforementioned problem, together with those NFRs that are most critical for selecting a blockchain solution (note that there are several other highly important NFRs for any IT solution, like availability, modifiability, usability, testability, security, which I have deliberately omitted here).

Observe that, typically, none of these three architectures support the concept of “smart contracts” – i.e. the capability where entities develop, deploy, and run arbitrary (potentially shared) business logic on top of the solution.

Hence, to the extent that your context does, indeed, ask for these specific NFRs to be satisfied, blockchain can be the optimal solution.

If you were able to relinquish even a few of the NFRs cited, then another solution could be better suited, especially considering that also blockchains come with some difficulties: Specifically change management in an immutable database and the difficulties in designing and operating very fast blockchains.

Architectures are selected by the degree to which they are able to economically fulfill a certain set of non-functional requirements. Forgetting this fundamental truth is, in my view, a major reason why we haven’t seen more really productive blockchain solutions.

Everyone is showing off what else blockchain is able to do — when the real question for a business is: For which problem do I really have to use blockchain. In other words, for which type of problems is blockchain the ONLY solution available?

As long as we don’t have a compelling answer to this one, blockchain will not be able to leave its current (early) state of pilots and proof-of-concepts.

One possible answer is the Internet of Things (IoT) (with IOTA as technology) – but that’s another post.

For more information on Cumulocity IoT please click below.